LG V10 doubles up on screens and selfie cameras (hands-on)

A smaller, always-on screen gives you shortcuts at the ready on this phone that's also a first with two front-facing camera lenses.

There are three things to know about the LG V10. First, a larger, 5.7-inch screen size inaugurates LG's new family of premium phones in a line that LG says bests the LG G4 and company. Second, it sports an always-on strip of a screen above the main screen that offers shortcuts to people and tools. Third, it's the first phone we've heard about that features two camera lenses on its face, one for you, plus an extra-wide-angle second sensor to capture your scene or entire group of friends.

Together, these three inflection points help define a phone that LG hopes will set it apart from a veritable horde of preholiday competitors from Apple, Motorola, Samsung, Sony, OnePlus...the list goes on.

We saw the LG V10 a few hours ahead of its launch in New York. Here's what we know about how this phone plays out. (See the full specs comparison here.) 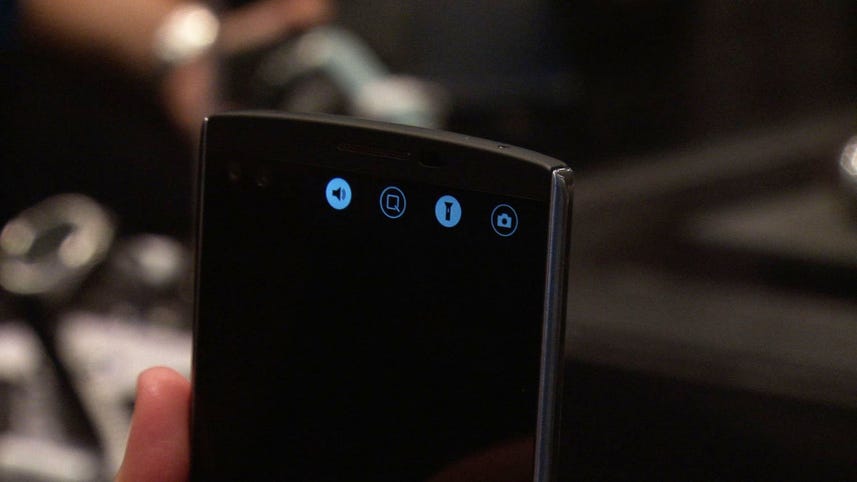 LG announced that the LG V10 kicks off a new line of handsets that's meant to play at an even higher level than the LG G series that fostered the LG G4. This is mostly because the phone is larger (which many now equate with better) and because it's made of metal and not plastic, unlike the G4.

Also, with a second front-facing camera lens, the V10 here does indeed pack in more hardware. We don't have exact prices yet, but we do know that LG is pricing it in the same category as the iPhone 6S Plus, which, unlocked, is in the $700/£619/AU$1,229 range.

2. Second screen more a strip than a ticker

Hype leading up to the announcement centered on a second screen, which was presumed to be like a ticker, similar to a scrolling strip of headlines and more that we've seen along the edge of the Samsung Galaxy S6 Edge (and Edge+ and Note Edge before both of those) and along the Samsung Continuum of 2010. It isn't.

Instead, this tiny strip up at the top right edge of the phone display works as more of an at-a-glance screen that shows you things like your favorite app shortcuts and contacts when you swipe along it. You can customize this area to include a limited supply of shortcuts and contacts, including your music player. Think of this second screen as a mini toolbar and you may find some use for it.

When the main screen goes dark, this slim strip is always on (by default, but you can turn it off), and sucks down only 5 percent of the phone's battery resources, LG claims. It does turn off when you slip it into a pocket, for example, and LG says that if you use it, you'll extend your battery life overall by using the glanceable second screen for information rather than lighting up the phone screen to check the weather and time.

In that sense it gives you a snapshot of the fact that you have messages waiting for you. This shows up as a badge, again, not as an alert that scrolls across the top of the screen. A few phones offer something like this; Microsoft calls it a "glance screen" that fills up the entire display, not just a small footprint along the top.

Watch this: Up close with the LG V10's dual front-facing cameras
01:12 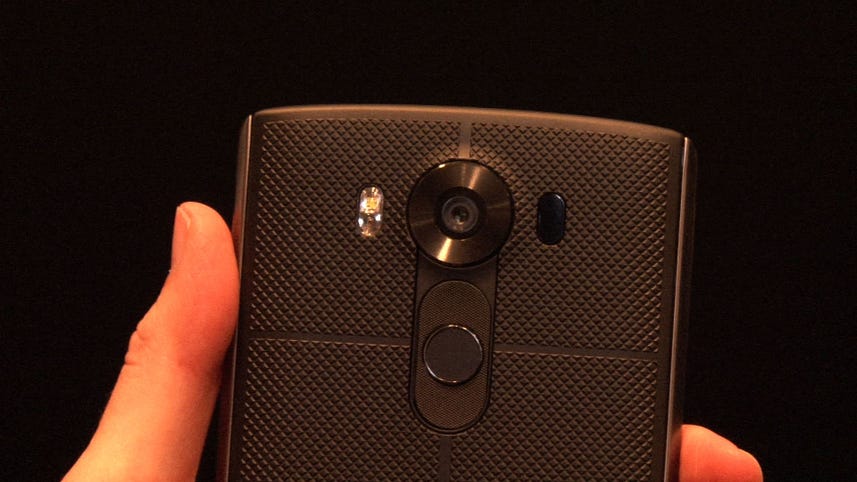 The main point here is that although this addendum butts up against the main screen and doesn't live in its own floating island on top of it, it does operate independently, and is customizable. We need some more time with it in the real world before we can pass judgment, but we're always interested in twists on the user experience.

3. Double the selfies, double the fun?

LG has done something we really haven't seen before: It slides two 5-megapixel front-facing camera lenses side-by-side on the V10 in a way that isn't trying to turn photos into 3D pictures as with phones of old. Each lens represents either an 80-degree angle photo for just yourself or a 120-degree picture for you and a bunch of friends. (Some may call this a "grouphie"; that's right, short for "group selfie". Gag.)

Either way, taking photos is straightforward. You still get an on-screen slider to beautify your complexion, but this time you press a button to swap between the two cameras. I suspect that most people will stick with one mode the majority of the time, though of course we'll fully test the camera when we get our review units in.

In addition to the two front-facing lenses, LG made these other camera enhancements below.

Fast sharing: Whichever camera you use, as soon as you take it, a menu pops up that helps you quickly share the photo you just took to social networks. This is promising, helpful implementation here.

Manual mode: The 13-megapixel rear camera, front-facing cameras and video recording menus all get a new manual mode, which lets you set parameters like white balance and focus on one of three mics to pick up audio. Video mode also acquires a slider control for zooming in.

Multi-view: This is a creative feature that lets you build a collage of footage from all three cameras, both front-facing and the rear. You can use a combination of video and stills. It saves and shares as a package.

Video clips: Perhaps inspired by HTC's Zoe feature, LG's camera app adds two automated highlight videos. One pieces together a 15-second video from a larger clipping by analyzing motion and gathering the bursts of activity. The second mode lets you shoot 3-second videos and auto-stitches them together, to form a day-in-the-life reel, for example.

As for the rest of the phone, the V10 shows off a textured backing in black, white or opal blue. I saw it in white, which worked nicely with the device's metal (stainless steel, actually) rose gold-colored rim. Like other LG phones, this one makes use of buttons on the back cover to navigate around, and folds its fingerprint sensor into the home button on the backplate.

It's a pretty phone to be sure, and one whose two-eyed face and ridged backing draw attention. Dig into the rest of the specs below.

The V10 launches October 8 in Korea, and will radiate globally after that. LG says to keep our ears perked for an early-to-mid November release in the US. No official prices have been announced; again, expect it to be in the iPhone 6S Plus range.

In the US, the LG V10 will sell through AT&T, Verizon and T-Mobile (but not Sprint).

Based on very limited time with the phone, the always-on screen and new camera functions add some small benefit, but at least those new features build out an already brawny package.

They seem more gimmicky than game-changing at the outset, but other phone-makers have used the idea of always-on information to good effect -- like Microsoft and Nokia Lumia with the glance screen, Samsung with the Edge display and Motorola with an always-on clock.

The dual front-facing cameras do strike me as an extra expense on LG's part. I don't think they'll get in your way, but some clever cropping would probably have the same effect as both a wide-angle and ultra-wide angle lens without having to add new, expensive hardware. However, built-in manual tools and easy sharing are useful additions so far.

As for evaluating the rest of the V10's might, stick with CNET as we spend more time with the phone and share more impressions here.