Can Lazer Tag be made even better with an iPhone or iPod Touch snapped on as a HUD? We give Hasbro's new iOS-compatible Lazer Tag Blasters a spin in a 10-person office game. 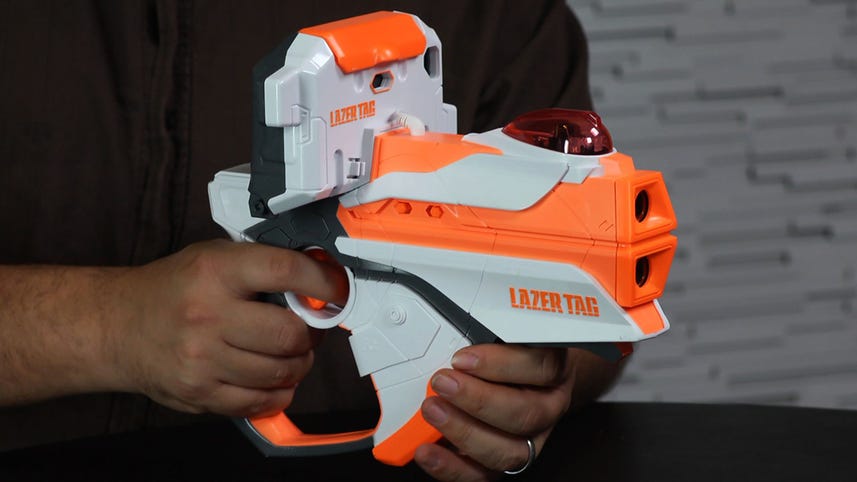 Back at Toy Fair, Hasbro unveiled a prototype of a Lazer Tag toy with an iPhone/iPod Touch dock, merging a '90s classic with the toy of the last decade. At first glance, you want to moan; adding an iPhone, iPad or iPod to a toy -- or, to anything at all -- has become a trend verging on cliche verging on utter annoyance. At second glance, you look at the Lazer Tag Blasters and think, "Wow, this is pretty cool." That's how CNET staffers including myself felt when Hasbro sent 10 of them over to our offices to play with.

When we actually started playing in a 20-person battle royale through CNET's hallways, it was pretty fun, too...though perhaps a little more confusing and chaotic than expected.

Lazer Tag, in the form of IR-blaster toys with sensors and flashing lights, has been around for years. Those who are long removed from carpet-walled arenas and helmet-and-vest gear get-ups (myself included) may not be aware that these toys only require the shooters themselves in order to play.

New to this year’s $40 Lazer Tag toy (also sold for $75 in October in a two-blaster pack) is a plastic bracket that mounts above the blaster, which can cradle an iPhone 3G, 3GS, 4/4s, or iPod Touch. This becomes a mounted Lazer Tag display, through which virtual laser blasts and targets can be seen and augmented with HUD readouts like hit counts, shield info, and weapon type.

Weapons? Shields? Yes, Lazer Tag has both. Shields have been around for years -- press a second trigger, and your screen will glow a protective blue, during which you can’t fire any virtual laser beams at anyone -- but the extra weaponry is new. You don’t need an iPhone or iPod Touch to play the new Lazer Tag; in fact, the blasters have detachable iOS device brackets and can work with older Lazer Tag toys. However, to appreciate the new power-ups and augmented-reality elements, you’ll need to own an iPhone or iPod Touch or borrow one from a friend.

How the app works
A downloadable iOS app, which is free and currently available from the App Store, keeps track of points earned in single-player training modes and uses that as currency to unlock new weapons and gear. You can also purchase these separately. Yes, Lazer Tag has gone freemium.

What are the extra power-ups? Virtual weapon upgrades can include rapid-fire attacks or more-powerful shots, and even -- believe it or not -- air strikes and augmented-reality drone attacks, too. The iOS app on its own is basically an augmented-reality shooting game much like many from the App Store. You can aim with your camera, fire virtual laser beams, and take down waves of robot drones that seem to come from all directions around you.

Locked into the Lazer Tag blaster, the game plays the same, but firing, shield, and reload action are now offset to the gun's physical trigger controls. This is all done not via a 30-pin connector, but through a headphone jack that relays information. The Lazer Tag gun becomes a clever virtual toy in this mode, like a 360-degree arcade light gun. The app starts you off on a training run and then there is a series of increasingly difficult drone-hunting stages. I couldn't get past level 2.

You can earn virtual currency in-game either with the Lazer Tag gun attached or with your iOS device alone.

The Lazer Tag Blaster
It takes six AA batteries to power up the Lazer Tag Blaster. The construction quality is solid, and the design resembles some weapon out of "Star Wars" or Halo. Your iDevice will need a silicone sleeve before insertion into the Blaster; Hasbro includes one for the iPhone 4/4S, and one for the iPod Touch. The 3GS and 3G don't need the sleeve. Because the Touch and iPhone have headphone jacks in different places, the connector cable cleverly loops around either side of the bracket.

Two switches turn the Blaster on and off, and adjust sensitivity of the IR sensors between indoor and outdoor play. The Blaster starts a game without an iOS device inserted if you pull the trigger. Beeps and blasts sound from the Blaster via speakers, and a red light flashes when you've been hit.

Three different triggers control gameplay: one shoots, one activates a shield, and the third on the outer part of the holster handles reloading and weapon selection.

Playing with lots of friends
Lazer Tag can be played with up to 24 players. We tried our match with 10.

In multiplayer games, the IR blasting part of the Lazer Tag gun comes back into play. You can either enter a free-for-all or join one of three teams via an in-app selection screen. Setting up the app wasn't immediately intuitive; for instance, the Lazer Tag guns can work without an iOS device attached, and will enter a different game mode if you switch them on and pull the trigger before the app's launched. Editor Brian Bennett gave it a go with an older Lazer Tag rifle of his own, and it seemed to work, except he lacked any HUD competitive info.

Once the game's started, you can aim and shoot at anyone, and if a hit is made, an explosion appears onscreen. Shield and personal health levels are shown in the corners, like in a first-person video game shooter.

We all had to start the match simultaneously, which took a few runs to get right. Then, we had some early-beta problems: a few Lazer Tag guns didn't seem to work with a few iOS devices in the office, and one or two editors suffered crashing apps (the iOS app has been updated several times already). Hasbro recommends that you activate Airplane Mode on your iPhone so you won't be interrupted by texts or calls.

We also couldn't figure out when the game was done. A timer counted up, not down, and after 5 minutes I had seemingly made a lot of hits while others sat on the side, eliminated. Most of us simply quit playing. Hasbro needs to do a better job of explaining Lazer Tag's basic rule sets; the included instruction sheet I was sent is sparse.

Launching AR attacks like air strikes adds a new wrinkle to the old Lazer Tag game (drones and planes appear onscreen, attacking enemies alongside actual players), but the implementation feels messy and confusing, and sometimes it's just too many targets at once.

At $40, Lazer Tag is a pretty affordable iOS-compatible toy for the holidays, but one that's shooter-heavy, and not perfect for every kid. It's also not perfect for every iPhone: in fact, with a potentially new iPhone and iPod Touch redesign just around the corner, these Lazer Tag toys could be instantly outdated. I'd expect Hasbro to release redesigned brackets at some point, but maybe not fast enough for this holiday season.

In its current form, Hasbro's new version of Lazer Tag is a mixed bag. It's undeniably fun and surprisingly interesting, but the pieces don't all come together clearly or smoothly...at least, not yet. As long as you're not hoping for competition-grade Lazer Tag and can put up with some bugs, it's worth it for the novelty.