Available from Cricket Wireless, the Kyocera Kona is a $59.99 clamshell feature phone with a 2-megapixel camera, 2.4-inch screen, and 2G connectivity.. 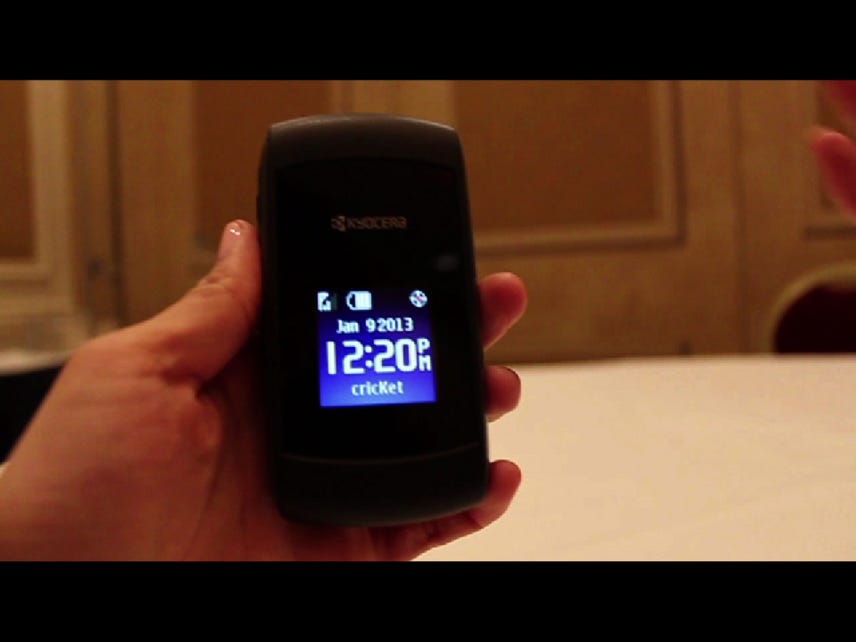 The Kyocera Kona doesn't look like much, but for mobile users seeking a no-muss, no-fuss handset that can do the basics, this is a phone worth looking into.

The device is Cricket Wireless' latest offering, and will be available on April 21 for $59.99. It will have a few goodies aside from making calls and texts, including a 2-megapixel camera and 2G data connectivity.

Design
The Kyocera Kona is a minimalistic, clamshell device that's simple and compact. It measures 3.94 inches tall, 2.05 inches wide, and 0.68 inch thick. When I held it in my hand, I noticed it was quite light, and at just 3.7 ounces, it'll have no problem fitting into the front pockets of your jeans or slipping into a small bag or clutch.

On its left are a Micro-USB port and a volume rocker, and the right edge houses a 3.5mm headphone jack. The internal display measures 2.4 inches and has a 320x240-pixel resolution. Beneath that is your usual numerical keypad. The handset's buttons are generously sized and spaced, and are easy to press. It also includes shortcut keys for the camera and audio speaker, as well as a circular navigation button and center select key.

The matte-black back plate features a textured pimpled design that helps with grip. Located on the rear is a camera and a speaker. In addition, you can see Cricket's logo emblazoned on the back.

Features
As a feature phone, the Kona won't provide much in the way of specs, but then again, it is for users looking for a low-maintenance, easy-to-use device.

It includes a 2-megapixel camera, though there is no flash. It's powered by an 870mAh lithium ion battery. As for memory, you'll get 256MB of ROM and 128MB of RAM. Other features include Bluetooth 2.1, and a WAP 2.0 Web browser that will be able to connect to Cricket's 2G network.

During my brief time with it, I saw that the user interface was very simple. The main home screen includes two options: menu and contacts. When you select the former, you'll see several icons for such things like Bluetooth, settings, a navigator, a few games and apps, a calendar, messages, and tools. There are also two voice services available: voice recognition and voice memo.

Outlook
While the device is no game changer, it is easy to use and has a sturdy construction. It harks back to simpler times, when users only needed a handset to do two things: make a call and send a message.

Of course, the Kona can do a bit more than that. Currently, the carrier's other feature handsets include the Samsung Chrono and the Kyocera Domino. Both are being sold for less than $30, so with a price of nearly $60, the Kona may still look too steep for some.