Google's pricey vision of a tablet-meets-Chromebook doesn't quite gel

Call me crazy, but Chromebooks should be affordable. That's how I came to love Google's push for a browser-driven, lite-computing future years ago, and it's how Chromebooks became a staple of school systems everywhere. No doubt about it: Chromebooks are great.

The Pixel Slate has a nice display, solid construction, a great-feeling keyboard accessory, supports mice and trackpads (like all Chromebooks), and has always-on Google Assistant as an option.

The Pixel Slate feels a little too heavy and has buggy software and unimpressive performance. It's expensive compared to competing Chromebook/tablet alternatives.

There are a lot of good ideas in the Pixel Slate, but this pricey Google tablet doesn't do enough to distinguish itself from the plenty of other great Chromebook options out there.

Now, $1,000 Chromebooks...I don't know. Google's made bleeding-edge Chrome computers for years, and the Pixelbook a year ago wowed us with an elegant design. The Pixel Slate tries to take on iPad Pro and Microsoft Surface territory by blending tablet and Chromebook into one device. It's the right direction, but the wrong product.

As I said after a week of using it, the Pixel Slate is the Mirror Universe iPad Pro. It has a full desktop-class browser and support for Bluetooth mice and keyboards with trackpads, which is great. Working on the Pixel Slate, with an optional keyboard, feels like working on a laptop.

This is the type of product I want future Chromebooks to be, but not at this price.

Tablet as full computer: Sure, of course

Sure, Microsoft's been offering the same solution on the Surface and on countless Windows 10 two-in-ones. Google's Chrome solution has some advantages in a lean OS that starts fast, automatic updates, excellent Google services and Google Assistant on tap, and support for the Google Play Store and Android apps, which run to varying degrees of success on the Pixel Slate.

The thin, cleanly-designed Slate is indeed a blank slate for running a lot of apps, and connecting to a lot of accessories. That's not a new idea, though. And it's not even the first Chrome tablet, either: the excellent HP Chromebook X2 is the choice I'd recommend instead, since it has an included keyboard.

Watch this: Google Pixel Slate: Unboxing the tablet and its accessories
09:15 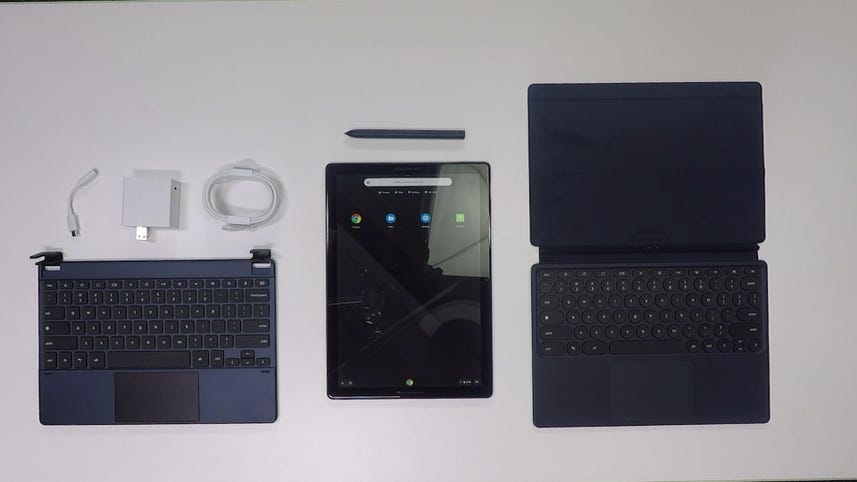 Whoa, this gets expensive fast

That's the biggest problem with the Pixel Slate (among several others): the $599 starting price for the tablet, with an Intel Celeron processor, 4GB of RAM and 32GB of storage, isn't upgradeable and lacks a MicroSD card slot. (My review loaner runs $1,000 for a Core i5 and 128GB of storage.)

That doesn't include a keyboard, which you'd surely want, and maybe Google's pressure-sensitive Pixelbook Pen stylus. Add those, and the entry-level price climbs to around $900.

How's the keyboard? Great, but there are two choices

Google's own Pixel Slate Keyboard ($200) is a lot like the Microsoft Surface Pro keyboard: it's meant to sit on a desk, and its rear cover turns into a magnetic adjustable stand. The keys are round and backlit, have a satisfying mechanism, and are generously spaced. The case attaches through a magnetic connector on the side of the Pixel Slate, powering the keyboard. It also doubles as a folio case. But unlike Apple's new iPad Pro keyboard, this isn't lap-usable at all. And it's an odd folio case, too: the plastic keyboard cover seems to slide across the Pixel Slate's display when closed.

The G-Type from Brydge ($160) turns the Pixel Slate into a clamshell laptop and feels great to type on. But it doesn't fold back to enable the Slate to be used as a tablet, which means it'll have to be removed. It pairs via Bluetooth and needs to be charged separately. And it attaches by sliding the Slate into rubberized brackets that hold the tablet in place, which feels less elegant and secure than Google's keyboard. It doesn't offer any protection to the Slate, either.

The Pen's less exciting than the Pencil

The Pixelbook Pen allows pressure-sensitive drawing, much like the Surface Pen and Apple Pencil, but it's not nearly as good. The chunkier pen uses a AAA battery, and using it with a variety of sketch and note-taking apps from Google Keep (which you can instantly take notes to) and Adobe Photoshop Sketch, it exhibits a lot of lag. Google's OS also seems to approximate where strokes are going, which created a subtle repositioning of line curves as I was doodling. I didn't love it.

Being able to tap to request things, search for things, or do anything gives the Pixel Slate more of a Pixel phone feel on a big screen. I like the way it's integrated at the press of a keyboard button, or by saying "hey, Google," so it's like having another Google Assistant-equipped smart screen. But Google's deep AI doesn't seem to surface in other dramatic ways as much as it does on the Pixel 3 phones. I expected a bit more and didn't see all that many everyday differences over any other Chromebook.

The Core i5 version of the Pixel Slate did OK in our benchmark tests, but wasn't exactly impressive. It also lagged considerably behind the laser-fast iPad Pro. Lag also emerges in other ways, too: Google's adapted version of Chrome OS sometimes had bugs and hiccups, ranging from apps not launching to a lot of jittery stuff when attempting to multitask. At this price, I expected buttery-smooth operations, and that's definitely not the case. It works, but that doesn't feel like enough. Battery life is fine, but again, nothing surprising.

Other things to note:

I'm not sure who I'd recommend this to

The HP Chromebook X2 is a better choice all around for anyone looking for a better-value performance Chromebook/tablet. For those who want a full computer in a tablet, there's the Microsoft Surface Pro. For the best bleeding-edge tablet for artists, the iPad Pro. That leaves the Pixel Slate in a weird middle zone. It's nowhere near as good a product as the Pixel 3 is as a phone, but it's a direction I'd like to see continue in Chrome? If it went on sale for a steep discount, maybe. But the Pixel Slate is attempt at pushing a luxury price on a device that doesn't feel like it earns it.

(This review was originally published December 22, 2018.)