Senior writer Seth Rosenblatt covered Google and security for CNET News, with occasional forays into tech and pop culture. Formerly a CNET Reviews senior editor for software, he has written about nearly every category of software and app available.

Editor's Note: On March 11, 2015, Google announced a second-generation Chromebook Pixel. The updated model offers improved hardware at a lower price. Be sure to head over and check out our thoughts on the updated Chromebook Pixel.

Pricing starts at a lofty $1,299; Web-based Chrome OS requires you to be online to do most tasks; Web apps can't yet compare to most Windows or Mac software, especially for media-centric activities like video.

Despite impressive hardware specs and solid industrial design, the Chromebook Pixel’s high price and cloud OS limitations make it impossible to recommend for the vast majority of users.

Google's Web-based Chromebook laptops seem to be heading in two different directions. On one end, there's the Samsung Chromebook Series 3. At the time of his writing, it's the best-selling laptop on Amazon.com. Perhaps not surprising, given its $249 price tag -- it's basically filling the low-end gap left by the collapse of the netbook and the rise of the 7-inch tablet.

At the other end of the spectrum is Google's new Chromebook Pixel. This is the first Google-designed laptop -- not one that was farmed out to a partner like Acer or Samsung. And Google has upped the ante, adding a high-res touch-screen -- with a pixel density greater than that of Apple's vaunted Retina screens -- and a real Intel Core i5 processor. But the 3.3-pound Pixel also has a high-end sticker price: it starts at a whopping $1,299. That goes to $1,449 for the step-up model, which adds a built-in 4G LTE cellular modem (and won't ship until early April of 2013).

For die-hard denizens of the cloud, this may look to be the ultimate online-only laptop. But like its less-expensive predecessors, the Chromebook Pixel comes with a long list of caveats -- all of which are amplified by its high price. The screen is gorgeous, but -- unlike Windows 8, which has been designed to interact well with touch -- the Chrome OS itself is not particularly touch-friendly right now. 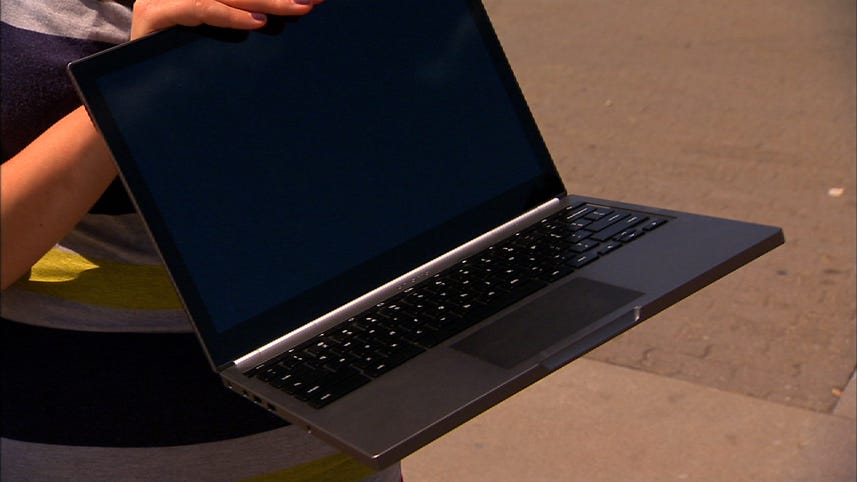 And unlike every other laptop in this price range, the Chromebook Pixel can't run familiar desktop software like Microsoft Office or Adobe Photoshop -- only the Chrome-compatible Web-based alternatives such as Google Docs and Pixlr Express. Want to do video editing? Even if you think WeVideo is as good as Final Cut or Adobe Premiere, be prepared for long upload and download times as you manipulate your video clips in the cloud.

Until Google can provide a Web app ecosystem that's as robust as the vast software libraries for Mac and Windows, and a cloud-based architecture that's as convenient as working on your local hard drive, this sort of high-end Chromebook is going to remain a tough sell.

We like to think of the Chromebook as a Google experiment -- a physical playground upon which a handful of wealthy consumers play out a utopian Google Fiber future that anticipates gigabit wireless everywhere. When that future arrives, the Chromebook Pixel may be just the hardware to navigate it.

Battery testing for this product is ongoing. We'll update this review with those results once they are available, and adjust the rating if necessary.

The screen
The marquee feature of the Chromebook Pixel is its multitouch-enabled screen, with enough pixels to match Apple's Retina Display. In person, it's nothing less than spectacular.

The 12.85-inch, 2,560x1,700-pixel display has a taller-than-usual 3:2 aspect ratio, and is covered with a layer of Gorilla Glass for protection. It also gives you an unusually high 400-nit brightness.

There's no doubt that the 3:2 ratio, as opposed to the more common 16:9 ratio, is a difference that becomes apparent in two ways. The first is with the touch screen's height: if you're typing away and then move to tap the screen, it feels just a hair further away than the shorter, wider Windows touch screens. That's not a bad thing, necessarily, but it is noticeable.

The second difference with the 3:2 ratio is that you get more vertical space. (In that regard, it's a throwback of sorts to the older, squarer 4:3 screens of the pre-HDTV era.) If all you use your laptop for is watching movies, you may lament the return to larger, black letterbox bars. But Chromebooks live in the cloud, which means the Web, and in terms of design, the Web is nothing if not vertically-oriented. You scroll down through your online docs or to read stories, blogs, and reviews such as this one. It's a natural fit for something so centered on the Web.

The screen density of 239 pixels per inch means it edges past the 13-inch MacBook Pro's Retina Display at 227ppi, making fonts smooth and graphics sharp. As with Retina devices, though, a lot of software and Web pages must be updated before graphics will look their best, but text is a pleasure, and going back to ordinary resolution displays is no fun.

Using the touch screen itself was a smooth experience. You'll encounter more problems from using Chrome, which does not have a touch-friendly interface, than you will from anything related to the Pixel's screen. For example, Chrome's tabs are thin, and it may take two or three taps to switch to the right one. Using the screen to draw or pinch-to-zoom was flawless.

Hardware features: Under the hood
Inside the Chromebook Pixel is a dual-core 1.8GHz Intel Core i5 processor, integrated Intel HD 4000 graphics, and 4GB of memory. That's a huge step-up for Chromebook power; previous models use low-end Celeron or ARM chips. Essentially, it puts the Pixel at the same computing parity as other Mac and Windows PCs.

There are two versions of the Pixel: the $1,299 Wi-Fi-only model has a 32GB SSD (flash storage), while the $1,449 64GB model adds built-in 4G LTE wireless. Both come with an impressive 1TB of cloud storage with Google Drive for three years. While LTE costs have not been fully revealed, if you go over the Google-comped 100MB per month, you can add the Pixel to your Verizon Share Everything plan for $10 per month. Per day access is available as well, although the price has yet to be revealed.

On the outside, the Chromebook Pixel has two USB 2.0 ports, a Mini DisplayPort for external monitors, an SD Card slot, and a combination headphone-microphone jack. Google promises five hours of battery life with typical usage. Bluetooth 3.0 and USB 2.0 mean that the Pixel is a version behind the latest standards. Likewise, you can get a Mini DisplayPort-to-HDMI adapter, but nearly all other laptops in this price range (with the notable exception of non-Retina Macbooks) offer built-in HDMI.

Even the $250 Samsung Chromebook Series 3 comes with one USB 3.0 port.

Google put two microphones, an HD camera, and a light detector above the screen. The two microphones are for better noise cancellation, but Google also tucked a third below the keyboard to help cut out typing noises.

Despite this being the best hardware design for a Chromebook yet, small blemishes keep it from truly shining. Video-out options are limited. Google picked a Mini DisplayPort so it could drive large external displays without having HDMI power consumption burdens, but let's face it: there are a lot more HDMI TVs and monitors out there, and nearly every other laptop in this price range (with the notable exception of non-Retina Macbook Pros) has HDMI outputs.

There's also the keyboard oddity. Google's intent on making this a thing, but heavy typists familiar with traditional keyboards still will miss the Caps Lock key and right-Delete key. Alt-Delete just isn't as fast, and overall the keyboard feels a bit mushy, especially compared to the snappy laptop keyboards of a Lenovo or newer MacBook Pro.

Performance
Normally at CNET, we test laptops by running specific software benchmarks on Photoshop, iTunes, Quicktime, as well as games like Far Cry, Metro 2033, and Crysis. Of course, none -- absolutely none -- of those programs can run on a Chromebook's Web-based operating system. As a result, we did some more anecdotal testing instead.

For video playback, we tested streaming HTML5, streaming Flash, and locally-saved video files on the Pixel and on a Samsung Chromebook Series 3 for comparison. There was virtually no difference between the two streaming video formats that couldn't be chalked up to buffering issues. Local playback was identical on both, even though the Pixel is currently running a more recent version of Chrome OS -- version 25 versus the Series 3's version 23.

However, when using more processor-intensive Web apps, the Pixel's superior hardware came to the fore. Whether running the Flash-based Pixlr, WeVideo, or the HTML5 deviantArt Muro app, the Pixel was provided an invariably smoother rendering, editing, and saving experience.

There are problems with the operating system, too, although Google generally has made good its promise to improve Chromebooks by issuing regular update to Chrome OS, which updates every six weeks.

One of the most memorable Chromebook fixes that came from an OS update was when the Cr-48's trackpad suddenly started working much better than it had previously, thanks to an update about six months after the Cr-48's release. So we know that Google can make substantial improvements through OS fixes.

With that caveat in mind, there are still some big hang-ups with the Pixel. Its 4GB of RAM isn't enough to save it from the same multiple-tab managing problems of Chrome-the-browser. Since Chrome OS's Web apps are essentially glorified browser tabs, this can quickly slow down your zippy Pixel experience.

Fine-tuning things like the keyboard refresh rate or battery use is impossible. That's a noticeable limitation when compared to Windows, Mac, or Linux-driven laptops.

And Web apps still don't match native apps for performance, features, and offline support. The fact that Google Drive will soon automatically sync 1,000 of your most recently used documents, up from 100 of them, is less important than the overall offline experience.

QuickOffice integration is coming to Chrome OS, a clever boon to businesses, and it'll arrive first on the Pixel -- but not for at least two to three months.

Should you buy the Pixel?
In a word, no.

While the Pixel makes manifest our subconscious expectations of the Chromebook when it first launched two years ago, the expensive, high-end, touch screen laptop still falls short in some key areas. Yes, there's a lot to like about the hardware, but the Web-based Chrome OS just has far too many caveats and compromises to justify its exorbitant price tag.

At $1,300 to $1,500, every other PC -- Mac or Windows -- will give the vast majority of users far more options for the money, though right now they'll have to choose between a high-res Retina screen (MacBook Pro, starting at $1,349) or a touch screen (many, many Windows models).

The Chromebook Pixel is an interesting "halo product," and the design chops Google has shown bode well for future models. But for now, this is laptop is targeted at a niche of a niche. The vast majority of people who use Google services would be better served by sticking with the Samsung Chromebook Series 3. It lacks the high-res touch screen and zippy Intel processor, but at $249, it's a lot easier to overlook its flaws.