Asus ZenBook Flip 14 review: A slim, stylish 2-in-1 with some graphics muscle

Thanks to discrete graphics and a good price, this thin-and-light 14-inch convertible is a solid Yoga alternative.

Asus currently makes the world's thinnest 13.3-inch laptop with discrete graphics, the ZenBook 13. If you'd rather have the flexibility of a two-in-one, Asus has you covered there, too, with the ZenBook Flip 14.

The Asus ZenBook Flip 14 puts discrete graphics in a thin-and-light, two-in-one laptop. The system's other components are better than you'd find in competing models at the same price.

Its USB-C port isn't Thunderbolt 3 and can't be used to charge the laptop, the keyboard feel might take some adjustment and there's no storage for the included pen.

Asus packed a lot of value -- and discrete graphics -- into the slim ZenBook Flip 14, making it fine choice for more performance and portability in a two-in-one design.

Though the Flip 14 is slightly larger, owing to its 14-inch 1,920x1,080-resolution display, it's nearly the same thickness as the ZenBook 13 at 0.5-inch (13.9mm). That, for the moment, makes the Flip 14 the thinnest two-in-one to trade integrated graphics for a more powerful discrete GPU, in this case an entry-level Nvidia GeForce MX150.

While integrated graphics are more power efficient, run cooler and cost less than a standalone discrete graphics chip, they also eat into your system memory and can't handle more demanding graphics tasks such as photo and video editing or gaming. The Flip 14 is not a full-fledged gaming laptop or a graphics workstation, but games are smoother and faster, and it can make quicker work of tasks you wouldn't even consider doing on other thin-and-light convertibles.

Priced at $1,299, the ZenBook Flip 14 stacks up well to our favorite premium two-in-one, Lenovo's Yoga 920. It might not be as polished as Lenovo's offering, but compared to a similarly priced 920 configuration, Asus puts in a faster processor, twice the memory and storage and includes its active pen for drawing and writing on its screen. And you get the Nvidia graphics chip; Lenovo just uses Intel's integrated graphics for the 920. (The ZenBook Flip 14 currently isn't available in the UK, but the price converts to roughly £945. Australian buyers can buy the Flip 14 without discrete graphics for AU$1,998.)

If you value mobility and price over the two-in-one design, the Asus ZenBook 13 UX331U is the better option. It's smaller, lighter, has a bit better battery life, and is $300 cheaper. There are performance differences between the two since the Flip 14 has twice the memory and a faster processor, but the differences are not huge. (You can see how they compare in the benchmarks at the end of this review.)

The ZenBook Flip 14 does look the part of a premium laptop, but like ZenBook 13, there are few things that take some of the shine off this model. The all-metal body is nice, but the way the top and bottom fit together isn't seamless and takes away from the overall feel.

I really like the hinge design, which holds the screen in whatever position you want, but also tilts the back of the laptop up for improved typing ergonomics. However, the keys don't have much travel, so hard typists might find the experience jarring (at least I did). The precision touchpad works well and feels good, though it might upset some to find the laptop's fingerprint reader built into the top-right corner of it. 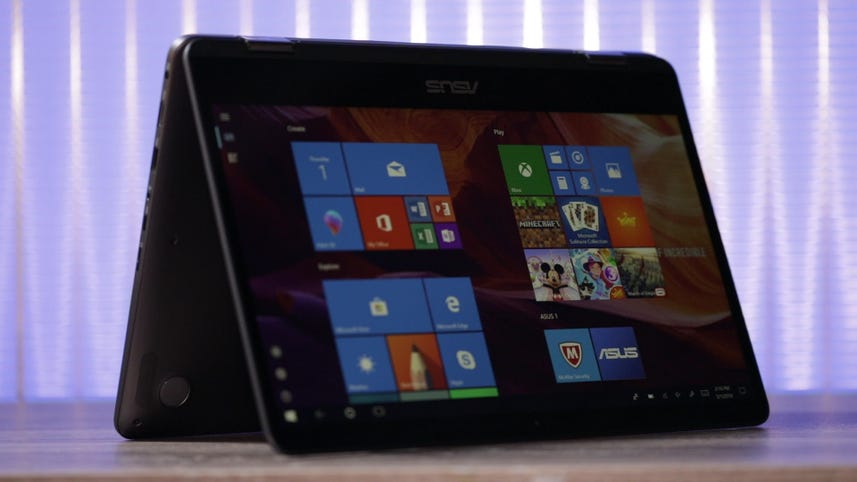 The laptop has a good port assortment including two USB 3.0 (type-A), a headphone/mic combo jack, a full-size HDMI 1.4 output and a microSD card slot. It also has a USB-C port, but it's USB 3.1 (gen 1) and not Thunderbolt 3, so data speeds and display support is more limited, and it doesn't support charging the laptop.

The screen is pen-enabled, and Asus includes its active pen that supports 1,024 pressure levels. It works well enough with just a slight amount of lag, however Asus doesn't include any way to store the pen with the laptop. If you need better sensitivity, Lenovo's Active Pen 2 available with the Yoga 920 supports 4,096 pressure levels and at least comes with a pen holder that fits in its USB port (which also isn't great, but it's better than nothing).

The combined performance from the ZenBook Flip 14's eighth-gen quad-core Intel Core i7 processor, 16GB of memory, 512GB PCIe NVMe SSD and 2GB Nvidia GeForce MX150 didn't disappoint. Like the ZenBook 13, getting through day-to-day activities like streaming videos and music while running Google Chrome with a dozen or more tabs open didn't slow it down.

The laptop also handled basic edits of high bit-rate 4K-resolution video and large raw images with relative ease. Playback of that 4K video wasn't an issue either, which was not the case when I tried to do the same on an older laptop with a seventh-gen Intel Core i7 processor and integrated HD Graphics 620.

As I mentioned earlier, the entry-level MX150 graphics chip isn't going to blow you away with its gaming performance: This isn't a gaming laptop. Frame rates aren't going to be fast enough for enjoyable play on high detail settings with newer graphically demanding games. It is, however, a clear improvement over Intel's UHD Graphic 620 integrated GPU.

The chip did hit playable frame rates on Bioshock Infinite at high detail settings, but dialed back to medium was a better experience. Playing Overwatch at medium settings at the display's native 1,920x1,080-pixel resolution was fast and smooth, and even over Wi-Fi it was lag-free. Both the laptop and the power supply get understandably hot under heavy load, however, so you'll want to make sure you're giving this plenty of air.

As for battery life, that was excellent, too. In our streaming video test it ran for 10 hours, 29 minutes. I was able to get through an 8-hour workday streaming music and writing in Google Docs with performance settings and brightness dialed back to 50 percent. It charges pretty fast, too. That said, the Yoga 920's battery ran for 12 hours and 50 minutes in our tests.

All the way around impressive

The Asus ZenBook Flip 14 isn't the first two-in-one we've seen with discrete graphics, but it is the thinnest, and at 3.3 pounds (1.5 kg) it's one of the lightest. Plus, Asus packed it with other components that competitors don't offer at its $1,300 price. The design is literally rough around the edges in places and a few other aspects could be better. As it stands, though, if you want a slim, light two-in-one with better-than-integrated graphics, put the ZenBook Flip 14 on your short list.