Thanks to a new graphics card, this bulky laptop turns in some of our fastest mobile gaming scores ever.

Near the end of an already great year for gaming PCs -- and gaming laptops in particular -- we're starting to see the first wave of systems that look forward toward a 4K future. Many of these laptops don't look a lot different than the previous few generations, which is a shame, but they feature Nvidia's new GeForce GTX 980M graphics card, which is the first mobile GPU capable of truly driving (some) PC games at 4K resolutions.

The Asus G751 has excellent performance, can drive games at 4K resolution, and includes a few handy shortcut keys gamers will appreciate.

You could buy about a dozen game consoles for what this costs. Battery life and design are stuck in the past. You'll need an external 4K TV or monitor for the highest-res gaming.

One of the first laptops that can drive games at 4K resolutions, the Asus G751 is an expensive but capable alternative to gaming desktops.

The first one of these 4K-friendly laptops we've tested is the Asus G751, a hulking 17-inch box that combines a high-end Core i7 CPU, a surprising 24GB of RAM, a big 256GB SSD paired with a 1TB 7,200rpm HDD, and finally, the new GeForce 980M GPU. This configuration is $2,499 (£1,949 in the UK; and AU$3,986 for a configuration with more RAM and a larger hard drive), although finding a specific model number (in this case the G751JY-DH71) for an exact Asus configuration in retail or online stores can be hit-or-miss.

And while we're talking about how this is an early entry in the 4K gaming PC category, note that the actual display on the G751 is a standard 17.3-inch 1,920x1,080 one, and not even a touchscreen at that. To move into the 4K gaming realm -- the really only interesting thing about 4K right now -- requires this laptop be hooked up to an external 4K monitor or TV. We've tried both big-screen 4K televisions and a new 28-inch 4K computer monitor from Monoprice for 4K gaming tests.

But, 4K gaming, even on a system such as this with the very latest mobile graphics hardware, still requires compromises. Newer games will play smoothly when output at 3,840x2,160, but in most cases only if you dial the game detail settings down to low or medium. Is the tradeoff worth it? For current-gen games, probably not. The G751 and its GPU are more impressive pushing games to their limits on the built-in 1080p display, or at 1,920x1,080 on an external monitor.

If you're not going to drop thousands more on a gaming desktop, such as the Origin PC Millennium or Dell Alienware Area 51 , The Asus G751, along with a small handful of other systems with similar specs, is as advanced as a gaming laptop is going to get right now. Just be aware that you have to be willing to pay a hefty premium for early-adopter status.

The G751 shaves a bit of bulk off of some previous gaming laptops from Asus' Republic of Gamers collection of high-end machines, but not enough to compete with a new, slim gaming laptop aesthetic being pushed by companies such as Razer and MSI . Right now, there's a call to be made between having a thin, ultrabook-like body, and having the latest components. In this case, Asus goes for performance over style.

If you do want to trade down to a smaller gaming laptop with a more modern design, such as the Razer Blade or the upcoming HP Omen, you're looking at an Nvidia GeForce 860M as the graphics card, which is fine for casual gaming, but not what someone looking to play games at high detail settings at 1080p or with medium settings at 4K, will need.

The chassis of the G751 rises in the back, tapering towards the front, giving you the illusion of a slimmer laptop when viewed from the correct angle. Decoration is thankfully minimal, but the matte-black lid is half covered by a brushed metal plate that transitions into the single wide hinge joint and is accented by a chrome Asus logo and the red backlit logo for the company's gaming line, an inexplicably arched eyebrow.

The base of the system is so large that the screen is inset by a few inches, leaving a hefty lip protruding from the rear when the laptop is open. That rear area houses two giant fan vents, painted red, so you can't miss them. If you can't hide the giant vents, you might as well accentuate them, the thinking might have gone.

Inside the matte-black interior is a backlit keyboard that feels well-tuned for gaming. The all-important WASD keys get highlighted with red key shafts, a subtle effect that you only really notice when not sitting on top of it. The keys have a deep, satisfying click, and the space bar bows out slightly on the left side, presumably to make it easier to hit with your left hand while gaming.

A handful of quick-launch and custom-programmed buttons sit above the keyboard on the left side. One has the familiar logo of Steam, the PC game distribution platform. Hit the button, and Steam automatically launches (if installed), but in its Big Picture Mode view, designed for living-room use. A button next to it with the logo of a video camera, launches Nvidia's Experience software package and the ShadowPlay feature built into that, allowing you to record or stream gameplay, much as one might on a service such as Twitch.

Also included is a software app called the Acer Gaming Center. It lists available storage space and allows for profiles with custom macros or screen or audio presets. It also, oddly, throws in the local time and weather. The Asus arched eyebrow logo is half-hidden on a single key near the top of the number pad -- that's the launch button for the Gaming Center software app. 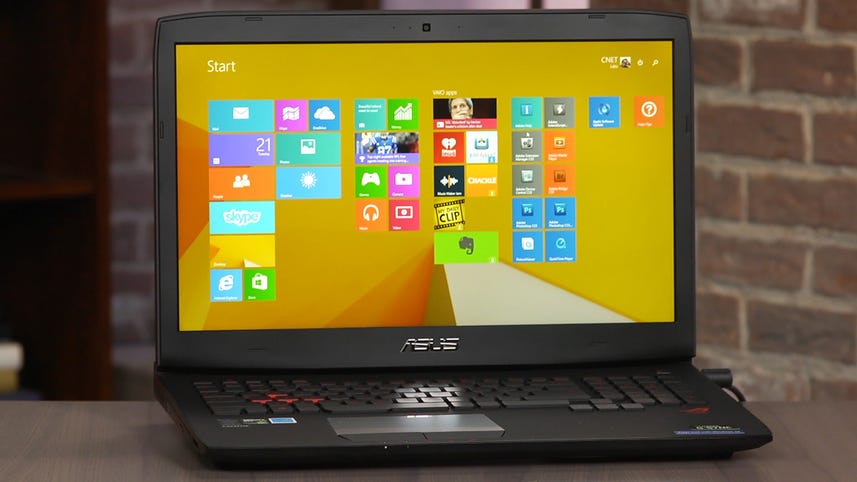 The large touchpad retains the separate left and right mouse buttons that most other laptops have done away with by now, giving the machine a retro feel. But, odds are you'll rarely use the touchpad, as PC gaming is nearly exclusively done with a mouse or gamepad.

The display is a make-or-break component for any gaming laptop. The one here has a 1,920x1,080 native resolution, which is still the standard for PC gaming, although higher-res screens are more common every day. The non-reflective finish on the screen is a welcome change from overly glossy displays, and because this is an IPS screen (in-plane switching), it looks good from off-angles. To date, the only native 4K screen we've seen on a gaming laptop is on the Lenovo Y50 Touch 4K , although that system's lower-end GPU isn't ideal for UHD gaming.

Almost all laptops, even big gaming ones, seem to be cutting down on the number of ports offered, especially video outputs. But here, it's a pleasant surprize to find HDMI, VGA, and mini-DisplayPort. An Ethernet jack, as found here, is necessary if you're downloading big game files, but the Blu-ray optical drive will be superfluous to many, and perhaps a chance to shave the price down a bit if a configuration without the drive was offered.

The collection of internal components here is close to top-end. An Origin PC Eon 17-S laptop we're currently testing beats it out by a little bit. That system offers a higher-end Intel Core i7-4940MX, an expensive part that didn't add much to its performance in our application and gaming tests, as well as a version of the same Nvidia GeForce 980M graphics card with 8GB of onboard RAM. The Asus G751 we tested has a Core i7-4710HQ CPU and 980M GPU with only 4GB of RAM. In real-world terms, the difference in performance was minor, but the $1,000 price difference between those two systems was not.

That said, our Origin PC 17-inch laptops, one with the new 980M GPU and one with the previous high-end 880M, both with MX-class Core i7 processors, were the fastest among recent gaming laptops in application tests, so there are some bragging rights to be had with the hefty additional investment.

But in game performance, the Asus G751 turned in ever-so-slightly higher frame rates, helped perhaps by having additional system RAM (24GB vs. 16GB). In the challenging Metro: Last Light test, at high settings and 1,920x1,080 resolution, the Asus ran at 46.7 frames per second while the Origin PC with the 980M card ran at 43.8fps. A similar system with last year's 880M card ran at only 27.4fps. BioShock Infinite showed us a similar spread in performance.

More interesting are the scores when plugging the system into an external 4K monitor. Our 28-inch Monoprice display allowed us to run various gaming benchmarks at 3,840x2,160 resolution, and the results were especially impressive when you consider a laptop with a mobile GPU is driving them. Running modern games at high detail settings at 4K resolution isn't really going to fly, but BioShock Infinite ran at 4K at medium settings at 47.9 frames per second, making it more than playable (at 1,920x1,080 with the same medium settings, it ran at 167fps). Thief, another recent game that's a little more challenging to run hit 29.8fps at medium settings and 4K resolution, jumping to 59.9fps when running the same settings at 1080p.

Just make sure that when you're jumping between game settings and resolutions to find the optimal experience, you keep everything plugged in. Do we really need to repeat the mantra that long battery life and gaming laptops do not go hand-in-hand? Even doing something simple, such as playing a high-definition video file in our video-playback battery-drain test, the G751 ran for only 3:14, and much less when playing games at high detail settings and resolutions. Nvidia is promoting the idea of tuning game performance for better battery life (by capping the frame rate and detail settings) through its GeForce Experience software app, and we're currently testing that.

The game performance from the Asus G751 should please anyone who wants a premium gaming experience without trading up to a massive desktop tower. Especially playing at 1080p resolution, this system, or really any laptop with a current-gen GPU, is going to outperform the big living-room game consoles from Microsoft and Sony by a large margin. Of course, this particular laptop costs more than buying 10 Ones.

We've tested Nvidia 980M laptops that cost more, but so far none that cost less. It's not a particularly portable PC, nor one that's especially well-suited for office work or other nongaming tasks, but if high-end PC gaming is your primary goal, this Asus is one of the first to handle 4K resolutions.