Apple's third-generation smartwatch comes in a version with an LTE phone connection that lets you make calls without being tethered to your iPhone -- but it comes with trade-offs on price and battery life.

Executive Editor David Carnoy has been a leading member of CNET's Reviews team since 2000. He covers the gamut of gadgets and is a notable reviewer of mobile accessories and portable audio products, including headphones and speakers. He's also an e-reader and e-publishing expert as well as the author of the novels Knife Music, The Big Exit and Lucidity. All the titles are available as Kindle, iBooks, Nook e-books and audiobooks.

A fully independent Apple Watch: It sounds like the destiny for wearables that Dick Tracy fans were hoping for for years. Will the Series 3 be that watch? Hard to tell, but at least Apple's not making any design compromises.

That also makes the Apple Watch Series 3 the stealthiest way to add a phone to your wrist, because it doesn't seem bulky or weird at all.

A steady stream of rumors suggested that Apple was on the verge of announcing a third-generation Apple Watch that would be able to connect to cellular networks, freeing it from its dependence on the iPhone for both voice calls and data.

The new Apple Watch Series 3 is just that, a smartwatch that essentially puts a tiny 4G LTE phone on your wrist. Available Sept. 22, the smaller 38mm model starts at $399 with cellular and $329 without. In the UK, that's £399 with LTE and £329 without; in Australia it's AU$559 and AU$459. Larger 42mm models have starting prices that are a bit more expensive across the board.

Additionally, cellular models will add charges to your monthly phone bill. On US carriers, it's looking to be $10 more per month.

The Apple Watch Series 3 is virtually identical in size and appearance to the Watch Series 2 but has built-in barometric altimeter, and allows for Siri's voice for the first time on an Apple Watch. Color options include a new gold aluminum finish, plus silver and space gray, and the cellular version is marked to a red dot on crown.

The Nike version is maintained in Series 3, as is the pricier Hermes and Edition luxury models.

The interesting part of this watch is that LTE connectivity was packed in without affecting size. Just keep in mind, depending on use, your battery life may vary. A lot.

Battery: From 1 to 18 hours, depending

Apple was rumored to have been working on adding cellular connectivity to the Apple Watch 2, but ran into problems with the battery draining too quickly. Apple says the Apple Watch Series 3 is equipped with a new W2 chip that's 50 percent more energy efficient. Battery life remains a concern, however, with both the LTE and non-LTE versions of the Series 3 rated to deliver "up to 18 hours of battery life." It'll be interesting to see what numbers we get in our tests with the cellular turned on.

Apple's claims on battery life reveal a pretty wide gap depending on use case:

For those hoping for an Apple Watch that includes an integrated FaceTime camera for making video calls, that didn't materialize in this model. But, considering this watch won't last more than an hour on an LTE phone call, a FaceTime camera wouldn't be very useful anyway. It sounds like LTE phone calls are really more of an "in case you need it" feature versus a "take all my morning calls" feature.

I tried on the Series 3, and it feels identical to the Series 2. That's a good thing: most cellular-connected watches I've worn have been bulkier and uglier, or have required stiffer, thicker band designs with embedded antennas. The Apple Watch Series 3 is neither.

Except for the red dot on the crown, you'd never know this was cellular-enabled. That's great, but maybe it also means you'll be lacking a way to show off your watch if you buy one. Apple sticking to the same design formula means the Apple Watch is still the Apple Watch, and it doesn't seem any more eye-catching than before.

I also tried Apple's new Sport Loop, a nylon band design that Velcros around the wrist for a buckle-free fit. The Nike color variant had a bright design, but the band's feel was an acquired taste: it felt like soft Velcro. I'm not sure I love it.

Making phone calls on my wrist felt similar, although now there's a number pad to dial up new numbers, too. In a fixed demo area, it's not easy to appreciate what "stand-alone" really means. 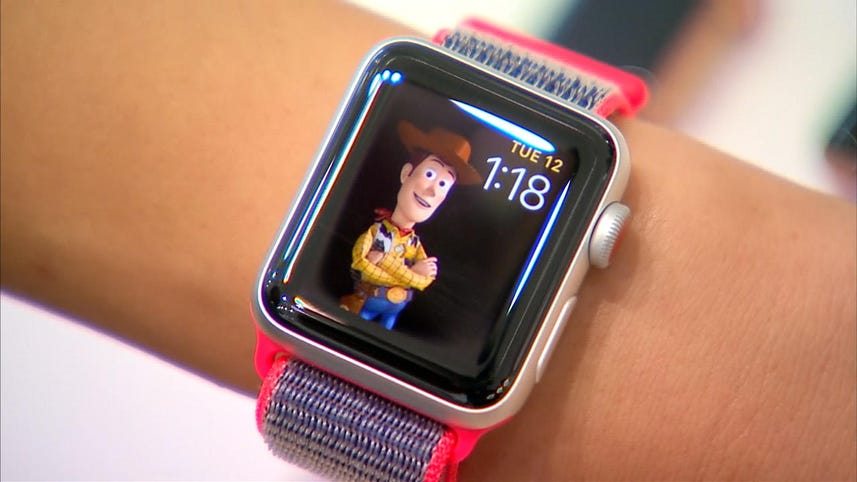 When I do a full review of the Apple Watch, it'll be time to check how much it really feels like a phone away from the iPhone. Making calls, using maps, streaming music and using apps: Will the battery life hold up to Apple's 18-hour all-day claim? Will it all seem seamless? If it does, it could be well worth the upgrade for anyone who needs the Apple Watch to be a phone-free travel communicator. Again, I just don't know those answers yet. But the Series 3 still needs an iPhone to sync and load apps, so even though it's independent, it still needs you to own an iPhone.

This isn't the full Apple Watch redesign, and it also lacks a few things I'd been expecting (no new watch face store, for instance, and there's no onboard sleep-tracking mode). But there is a barometric altimeter now, which could help track stair climbing and elevation. Will that give the Apple Watch Series 3 an edge over other fitness smartwatches? Maybe, maybe not, but again, stay tuned. This year, the new features are all about it being a phone, too.

Keep in mind, there's a phone-free version of the Series 3, and also a less expensive Series 1, you could buy as alternatives.