Meet the 4-inch iPhone SE: Like the iPhone 6S, only smaller and cheaper (hands-on)

Apple brings back the smaller iPhone for less, but doesn't skimp on internal processing power.

In a world of big phones, Apple is going small. Again.

The newly announced iPhone SE has a 4-inch screen, and all the processing and photographic might as the larger, newer iPhone 6S -- plus, the SE launches with version 9.3 of Apple's iOS software, which also became available today for any iPhone.

Also onboard: Live Photos, which turns photos into a 3-second clip, and always-listening Siri, so Apple's virtual assistant is always ready to serve you when you say "Hey, Siri!" And Apple Pay comes aboard, too.

What it doesn't have is 3D Touch, Apple's pressure-sensitive screen navigation that opens submenus when you press and hold the screen. (Which is, we bet, a feature you might be fine missing out on.) 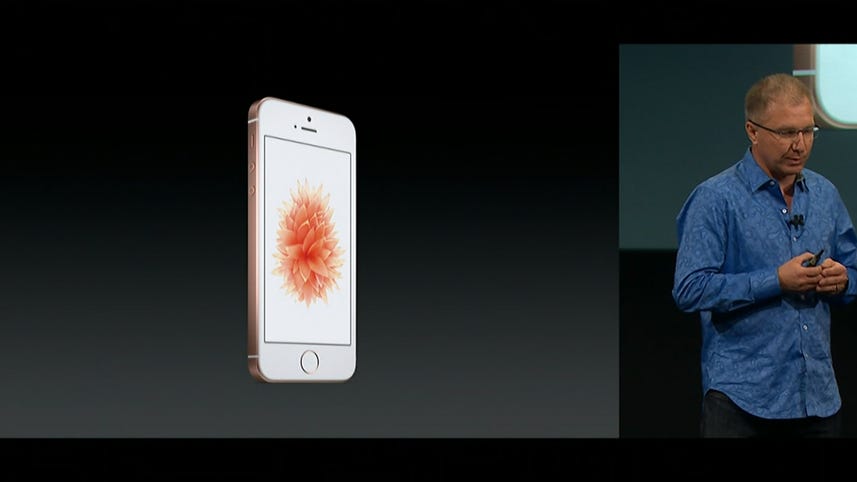 We can't overemphasize how much the palm-size SE feels like the iPhone 5S because, design-wise, it's basically the same thing -- and that older design might throw you if you're into the curvier new iPhone forms.

Once we got our hands on it, we could really see how the most petite iPhone we've seen since the iPhone 5S (also 4 inches) matches the larger iPhone 6S and 6S Plus on speed and features. It's zippy. The phone slipped easily into a shirt pocket and disappeared, just like old times.

When it comes to camera quality, the SE should be just about as good as Apple's other top-end phones. Apple doesn't skimp on the 12-megapixel camera, another 6S carryover. Low-light selfies work on here, too, because the screen flashes to illuminate an otherwise-dark scene. 4K video is there, as well.

There's one catch, of course: This iPhone SE comes out midway through the iPhone 6S life cycle. An iPhone 7, which will at least have a better camera and processor and who knows what else, is expected in September. Do you care, or do you just want a better, small phone? The SE might not be upgraded every year. And maybe you wouldn't even want a new phone that often. But if you've been hoping and wishing and praying for a smaller phone, the SE once again fills that role. (Also see smaller-size Android phones here.)

It just proves that, right now, the iPhone has become a gadget that comes in three sizes, and it'll stay that way.

The iPhone SE sells in countries like the US, UK and Australia first, and rolls out to 100 countries by the end of May. Preorders start March 24; the SE is grabbable March 31.

Specs and other things you should know

See all of the news from Apple's March 21 event.