iPad Pro 9.7-inch review: The best iPad ever has your laptop in its sights

Apple has shrunk down last year's oversize iPad Pro and added a few enticing new features. So, who should -- and shouldn't -- upgrade to the new iPad?

A higher price, plus expensive accessories. Less RAM and a slightly slower processor than the 12.9-inch iPad Pro. iOS still limits overall flexibility of this iPad.

It's still not a full-fledged laptop killer, but the new 9.7-inch iPad Pro is the best iPad ever made -- a near-perfect balance of tablet power and portability.

Apple's new iPad Pro is a sight to see

But if I already had an iPad Air 2, I'd hold off unless I really needed the drawing features enabled by Apple's excellent Pencil stylus (sold separately for $99, £79 and AU$165). I'm writing this on the 9.7-inch iPad Pro with its Smart Keyboard sitting on my lap. On a plane. The keyboard's comfy. It's not backlit, but I can guess the keys by touch pretty well. The display is beautifully crisp and vibrant. And it runs a magic mix of work tools and fun stuff. I can read easily. I can play games. I can watch movies. It's extremely convenient.

I've used the Air 2 and a Belkin keyboard case as my go-to for a while now. It's a compact, convenient combo. And I type on the iPad. Lately, a lot. I use it for taking quick notes, or as a security blanket when my laptop's somewhere else. It comes with me to work.

But the iPad still, despite Apple's insistence on it being the future of computing, isn't a laptop replacement. I can't bring it to a press conference and make it my one machine to cover the event. I can't run the camera-tethering software I need, or easily communicate in a window with my teammates via Google Chat (though I can with Slack), or write and edit and publish stories from my in-browser content tools. I can't even do my corporate expenses on my company's Java-based accounting system. Maybe I could come up with some way it could meet my needs, but it wouldn't really do it the way I'm used to. And that's the point, really. My tools don't always line up with the iPad's tools. The iPad, and its vision of the future of computing, remains stubbornly separate from the Mac, and less multipurpose than a Windows device.

All of those frustrations seem to to belie "Pro" moniker on this iPad. And yet, if I were to pick the iPad that came closest to perfection, it would be this one. It's a portable dream. The tiniest little productivity tool Apple makes. It's got performance, better sound and display, and -- what am I looking for that's really missing?

Nothing, except I want the iPad to be more like a laptop. Just a bit.

Last year's iPad Pro, the 12.9-inch one, was crazy-big -- the biggest iPad to date. I felt like I was carrying a sheet of glass everywhere. But it had some good features, supporting the fantastic-but-expensive pressure-sensitive Pencil stylus, quad speakers and side-connected keyboard accessories. This iPad's got all of those, and even more, in the same-size body as the older Air 2.

Weirdly, this smaller iPad has a few key improvements over the massive 12.9-inch iPad Pro, and they're pretty significant:

Better cameras: Its cameras are entirely better: a 12-megapixel rear camera that can record 4K video (with real flash, no less) and a 5-megapixel front camera with Retina Flash give the 9.7 Pro the same cameras as the iPhone 6S. Does that matter? It does if you're using the iPad as a camera. You might mock the idea of taking pictures on an iPad, but having top-notch cameras on a tablet has no downside. (And for those of us who use the camera as an on-the-fly document scanner, it's definitely an upside.)

Better screen: The iPad Pro's display is fantastic, too. True, it's the same resolution as the older iPad Air 2, but it's gotten markedly better glare reduction, brightness boost and Apple's weird-but-strangely-good-for-reading TrueTone automatic color adjustment. Almost like an automatic and more subtle version of iOS 9.3's Night Shift, this iPad continually adjusts its color temperature to match your environment. It's not annoying, and it's so subtle that it's easy to forget it's working unless you toggle this feature off in settings. Seriously, the antiglare, brightness and color-temperature-adjusting improvements make this iPad far better as an outdoor -- or even indoor -- device.

But there are a few little drawbacks compared with the larger iPad Pro. This smaller model has the same A9X processor, but in benchmark tests it runs a bit behind the 12.9-inch version. I doubt any human would notice, though. It also has half the RAM -- 2GB versus 4GB. I haven't seen any issues yet, but for future-proofing, it's frustrating -- RAM helps a lot with multitasking. But one gets the feeling that these features were toned down only to keep this smaller Pro from being a slam-dunk choice over its larger sibling. And, of course, this smaller model has the same pixel density, but fewer pixels. For large-scale art, the 12.9-inch model can simply show more.

That said, while it's less expensive than the larger Pro, the 9.7-incher is still expensive compared with most other tablets. It costs more than previous iPad Airs did. You could spend well over a thousand, if you spring for the highest capacity (an insane 256GB) and built-in LTE cellular wireless, as well as the Pencil and Smart Keyboard.

Battery life, which Apple estimates as being the same as on the iPad Air 2 and 12.9-inch iPad Pro (10 hours), lasted 11 hours even on our video playback test with Wi-Fi off at 50 percent brightness. Basically, the battery life is about the same as every other recent iPad: good enough for at least a solid day of use. I've rarely burned more than 50 percent of my battery in a single day.

Spending up for a more futureproof iPad

Why would I get this and not just buy a more affordable iPad, like the still very-good iPad Air 2 -- which Apple just discounted? Well, this is more versatile, I tell myself. And it's simply better. And if you care about drawing or design in any way, the added Pencil functionality means you can use Apple's stellar pressure-sensitive stylus for a growing bunch of apps like Adobe's creative app suite and FiftyThree's Paper app, my go-to idea-sketching tool.

Maybe that's why Apple put "Pro" in the iPad Pro. It's not for everyone. But if the iPad and iOS ever choose to grow out and combine for a serious PC-beating device, then this Pro's capabilities might be a good place to start. And, to be sure, this Pro will feel better (and be a better investment) in a year or two, when Apple is releasing iOS 11 and iOS 12.

Still waiting for a leap in software

But for the iPad to truly be better from now on, it needs software and an OS that can let it be a pro tool for anyone at all. More flexibility. Other types of smart connector-compatible accessories, like maybe (dare I say) a trackpad. Or, if someone else had an idea for a pro tool it could snap into, why not make that too? Being pro means having options. To me, at least.

Yes, I want more versatility in iOS. I want Mac OS X to find its way into the iPad, somehow, to dovetail, so I can bring an iPad along with me on a mission-critical event (a business trip, a presentation or -- for me --an Apple keynote) and use it instead of a MacBook. iOS has slowly gotten more adept with split-screen apps, picture-in-picture and a lot more interconnected tools. But the only thing holding the iPad back, at this point, is its software definition of how it chooses to be a computer. Its hardware is damn near perfected.

Consider the Microsoft Surface Pro, which has blended a full Windows 10 world into a tablet and done it just fine. The iPad is long overdue for that type of flexibility. Sure, the iPad has an unbeatable library of apps and a growing flexibility in iOS to handle cloud and locally connected jobs. But it's not the same as a fully flexible computer.

I love the iPad Pro 9.7. It's my favorite iPad. It's the one I'd buy right now. But I really hope Apple steps up and gives it the types of diverse smart connector-enabled accessories and revamped OS that this hardware could use.

The original Mac had a 9-inch screen. This iPad has a 9.7-inch one. There's something in its size that doesn't feel accidental. This iPad could truly be the successor to the Mac -- when Apple lets it be.

Watch this: 5 settings every new iPad owner should change
01:29 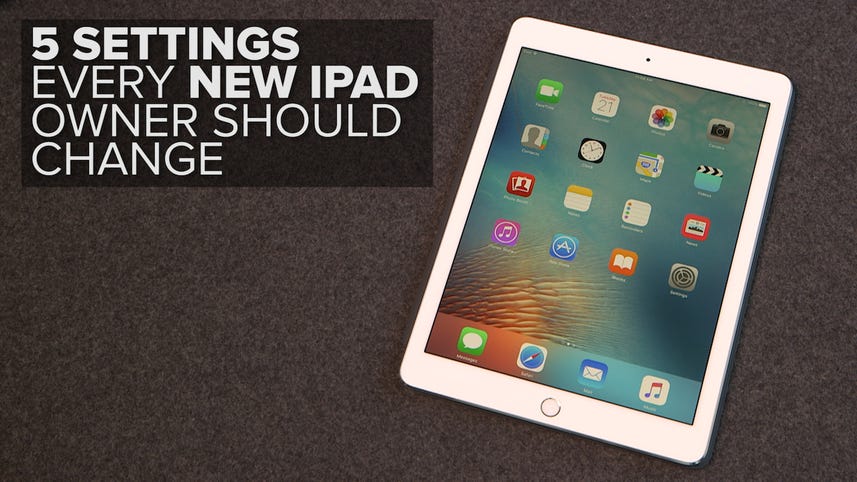