Tech at sea: All of the gear one rower hauled across an ocean

See the gadgets Tori Murden McClure took on her solo rowing trip across the Atlantic.

Tori Murden McClure was the first woman -- and the first American -- to row solo across the Atlantic.

Now she's the president of Spaulding University in Louisville, Kentucky. She's pictured here with the same boat she used to cross the ocean two decades ago. 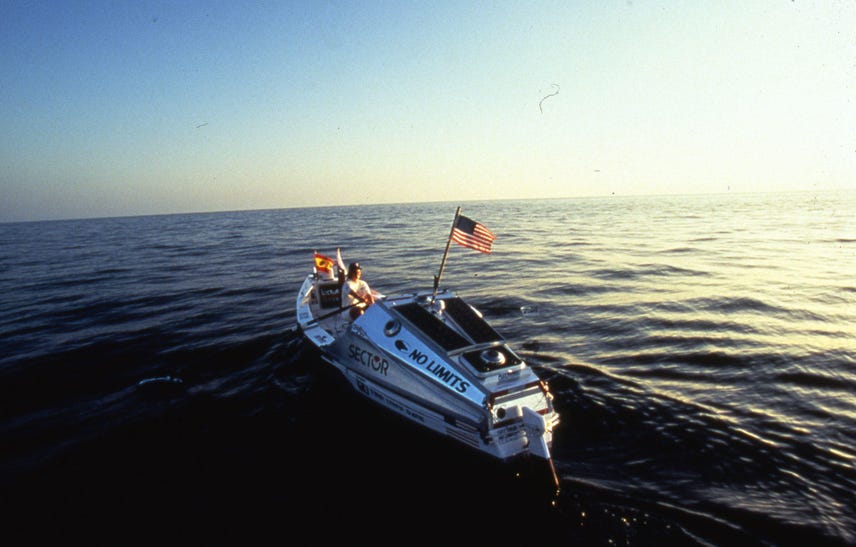 Tori's rowboat weighs 1,800 pounds and measures 23 feet long and six feet wide. She built it over several months with friends in Louisville.

During an attempted trip across the Atlantic in 1998, she got caught in a series of hurricanes and other bad weather that damaged her boat and led to some injuries.

She used the EPIRB to alert a rescue crew to her location and she was picked up by a nearby container ship called the Independent Spirit. She spent a total of 85 days alone at sea, but didn't reach the other coast.

Some gadgets fared better than others.

This Sony Mavica MVC-FD7 digital camera, which she took on her 1998 trip, is covered in rust after an unfortunate, extended submersion in salt water.

A Motorola Iridium satellite phone, plus a Stratos subscription service, made it possible to communicate with people back home.

This Magellan GSC–100 was for sending and receiving text messages. ORBCOMM provided the satellite service.

Sony cameras on both trips let her document life on the boat, record herself and capture footage of whales and other things she spotted along the way.

The Plastimo Contest 130 compass is designed for boats. The company still sells this model today, although it looks a little different.

A regular compass was an important navigation tool.

"I know I had to find Europe, but I didn't have to find particular channels, so I just had to keep rowing east," Tori says.

To pass the time, she used a couple of Sony Walkmans on her 1998 rowing trip to listen to books on tape, recorded lectures and music.

She upgraded to CD players for her second rowing trip in 1999.

It would take her 40 minutes of math using a sextant for navigation during her first trip, but she'd get her location to within about 100 miles. "I didn't want to trust my life to anything that required batteries," Tori says.

A handheld  Garmin GPS 38 served as another navigation device.

She also carried this Mitsubishi laptop with her as another form of communication. She used it to write emails through the satellite phone.

She didn't use this yellow laptop as much as the other one, because the Mitsubishi model was "smaller and easier to handle."

A Backpack Bantam drive played CDs with instructions for using and repairing the equipment on her boat.

Hard cases made by OtterBox held some of her equipment. She likes Pelican cases, too, even though they're "heavy and hard to open with wet hands."

Tasco binoculars on both trips were for watching for whales and dolphins and nearby ships.

A Uniden very high frequency (VHF) radio let her communicate with nearby ships after her other communications failed during her first trip.

A socket wrench was essential for making repairs on her boat.

Tori has taken this Patagonia jacket on many of her adventures.

Tori was also the first woman and the first American to ski to the South Pole.

13 Photos
Movies Coming in 2022 From Marvel, Netflix, DC and More