Netflix original shows of 2015 and beyond (pictures)

These are the hot shows you need to know about that are exclusive to the streaming service.

The streaming service is also branching out to its first Spanish, Italian and French language shows, its first British show, and much more.
So warm up your slanket, stick some popcorn in the microwave and click through the pictures to see how'll you be bingeing in 2015 and beyond.

The first Italian original from Netflix will be "Suburra", directed by Stefano Sollima who also helmed Italian crime dramas "Romanzo Criminale" and "Gomorra". Like "Gomorra", "Suburra" will begins life with a movie before the series follows. After the movie has appeared in Italian theatres, film and TV show will debut on Netflix.

Inspired by the West End and Broadway hit "The Audience" starring Helen Mirren (pictured) and written by Peter Morgan, this 2016 show explores the relationship between Buckingham Palace and 10 Downing Street. It's the first UK production from Netflix, because of course there's nothing happening in Britain except the royal family.

The first French-language original show from Netflix is a sprawling crime drama focusing on the mayor of the city of Marseille, played by Gerard Depardieu. Created and written by Dan Franck, writer of political potboiler "Les Hommes de l'ombre" and co-writer of "Carlos", it's shaping up to be like "Boardwalk Empire" or "House of Cards" told "from a uniquely French viewpoint".

Christopher Guest, the comic genius behind "Spinal Tap" and "Best in Show", explores the world of "Mascots" in a Netflix show.

Stand-up comic and "Parks and Recreation" star Aziz Ansari is a jack of all trades in sitcom "Master of None", streamed from November 2015.

'With Bob and David'

After appearing in "Breaking Bad" and "Arrested Development" respectively, "Attack of the Show" comics Bob Odenkirk and David Cross return to sketch comedy on Netflix show "With Bob and David".

"30 Rock" creator Tina Fey recruits her former co-star Jane Krakowski and Ellie Kemper (pictured) from "The Office" for "Unbreakable Kimmy Schmidt", a sitcom about a naive survivor of a doomsday cult bringing her sunny disposition to the Big Apple.

US comedian Chelsea Handler is presenting four new documentary films on Netflix, and starts a new chat show on the streaming service in 2016.

In its quest to take over the world, Marvel is bringing not one, not two, but five original shows to Netflix. The interlinked series involve superheroes fighting crime in Hell's Kitchen, New York. The first to arrive in April 2015 was "Daredevil", starring Charlie Cox (pictured) as the blind lawyer and vigilante. A second series has already been confirmed.

Jessica Jones is a former superhero who is now a private eye in the world of Marvel superheroics. She's played by "Breaking Bad" guest star Krysten Ritter (pictured), appearing alongside Carrie-Anne Moss and David Tennant in 13 episodes late in 2015.

Luke Cage, one of Marvel's first black superheroes back in 1972, is played by Mike Colter, pictured above in Xbox spin-off "Halo: Nightfall". He'll have his own series after debuting in "Jessica Jones".

Rounding out the Marvel quartet is martial arts expert Iron Fist (pictured right), who first appeared in comic form in 1974.
After the separate Marvel shows are finished, the four heroes will unite in a miniseries called "The Defenders". Excelsior!

Showbiz legends Jane Fonda (centre) and Lily Tomlin (pictured right with their "9 to 5" co-star Dolly Parton, left) play Grace and Frankie, long-time rivals united when their husbands -- played by Martin Sheen and Sam Waterston -- run off together. The 13 episodes are makin' a livin' from 8 May.

'Kong: King of the Apes'

King Kong escapes from Alcatraz to take on robot dinosaurs -- sold! -- in this CGI animated movie and 12-part TV series, coming in 2016.

'The Adventures of Puss in Boots'

Puss in Boots -- the "Shrek" version -- swashes buckles in 26 animated episodes, released five at a time throughout 2015. "Shrek" star Antonio Banderas hasn't signed on to voice Puss, but Danny Trejo lends his gravel-like tones to the bad guy.

Part trucks. Part dinosaurs. All fun! Based on a book by Chris Gall, animated series "Dinotrux" is expected to roar onto Netflix in 2015.

The first original documentary series from Netflix dispatches "Jiro Dreams of Sushi" director David Gelb to profile six of the world's top chefs. Pictured above is a dish from chef Niki Nakayama. Tasty. 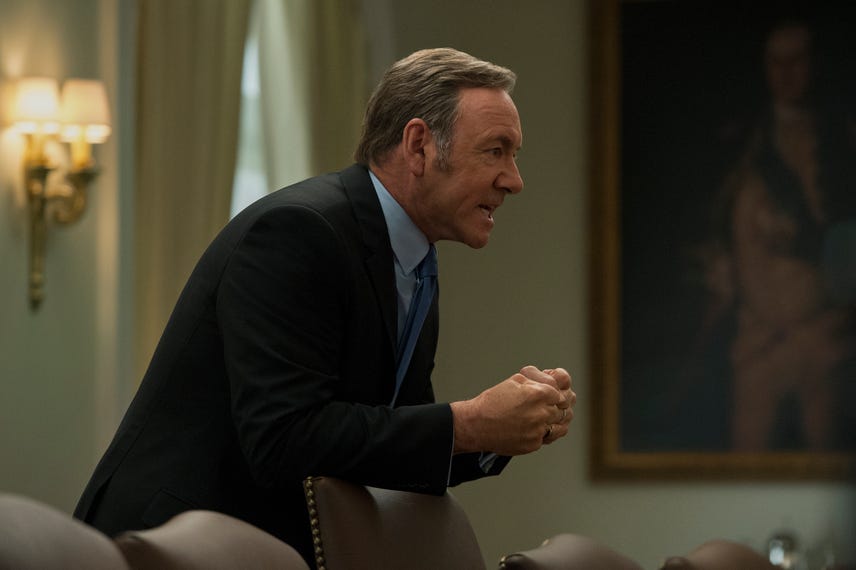 Where it all started: the first new show to be created by Netflix was "House of Cards" in 2013. Directed by David Fincher and starring Kevin Spacey and Robin Wright, the award-winning political scheme-'em-up has now completed its third season.

'Orange Is the New Black'

The first phase of Netflix originals was rounded out by Eli Roth-produced gothic horror "Hemlock Grove". Starring Bill Skarsgard (pictured), it's also been renewed for a third season.

First shown on Norwegian TV, this comedy-drama was billed as Netflix's first foray into original programming. A sort of spiritual successor to "The Sopranos", it features the classic crime drama's Steven Van Zandt as a mafiosi heading into witness protection. Series three was shown in 2014, with a fourth a possibility.

"Arrested Development" star and voice of Lego Batman Will Arnett is joined by "Breaking Bad" alum Aaron Paul and Alison Brie of "Mad Men" and "Community" for "BoJack Horseman", a surprisingly character-rich animated series involving an alcoholic sitcom has-been... who happens to be a horse.
Will Arnett will also appear in "Flaked", which he has developed with "Arrested Development" creator Mitch Hurwitz.

As well as originating new shows, Netflix has rescued fan favourites from cancellation by other networks. Following on from other rescued shows like "Arrested Development", season 9 of Canadian mockumentary "Trailer Park Boys" streamed in March 2015.

Joel Kinnaman (pictured left) and Mireille Enos (right) starred in the Emmy-nominated US version of the Scandi-noir crime drama, which was was killed off by TV network AMC not once but twice. It was rescued both times by Netflix, with the fourth and final season now streaming.

Shown on A&E in the US but cancelled in 2014, this tale of a Wyoming county sheriff was picked up by Netflix for a fourth season.

A seriously major scalp for Netflix, the sixth season of the animated series set during the "Star Wars" prequels was streamed in 2014.

Despite featuring nary a swimming pool, historical epic "Marco Polo" has been renewed for more exploration in a second 10-episode season.

'The Legend of Zelda'

Link quests for his princess once again as the classic Nintendo game appears in cartoon form in 2016.

Based on a toy line, "Ever After High" is set in a boarding school in the world of fairytales. And speaking of Mattel toys, cuddly 1980s bears Popples will be revived in a cartoon later this year.

'A Series of Unfortunate Events'

Skidmark, Turbo, Whiplash and Chet star in "Turbo FAST", another DreamWorks spin-off, which will be followed by a series based on forthcoming film "BOO (Bureau of Otherworldly Operations)".

Another kid's concept being revived in 2016 is this Canadian Disney show about a time-travelling toddler.

One of Netflix's moves to take on traditional networks is to follow HBO's method of producing stand-up comedy specials from big names comics. Netflix has previously produced specials from Nick Offerman (pictured about to be steaked by his wife Megan Mullally), Aziz Ansari, Bill Burr, Chelsea Peretti and many more.

'F is for Family'

Boston comic Bill Burr (pictured) -- also seen in "Breaking Bad" -- is the head of a 1970s family in this animated sitcom he's developed with "Simpsons" writer Michael Price. Laura Dern and Justin Long will each lend their most wicked awesome accents.

Gillian Jacobs (pictured), star of "Community" -- itself rescued from network cancellation by Yahoo's online streaming service -- will fall in "Love" in 2016, the show created by Judd Apatow and Lesley Arfin.

This Canadian sci-fi drama will appear on TV on City, then stream around the world on Shomi and Netflix in May. It stars "iCarly" alum Jennette McCurdy as a pregnant teen in a town where everyone over the age of 21 has died.

Coming in 2016, this eight-part drama will be co-written by Brit Marling, who will also star, and Zal Batmanglij, who will also direct. The pair have previously collaborated on movies "Sound of My Voice" and "The East".

"Moulin Rouge" and "Great Gatsby" director Baz Luhrmann duets with "The Shield" creator Shawn Ryan on this 13-part musical drama exploring how New York in the late '70s gave birth to hip-hop, punk and disco. It's tuning up in 2016.
Pictured are the Ramones playing at the legendary CBGB club, because what could be more New-York-in-the-70s than that?