We handpick the products and services we write about. If you buy through our links, we may get a commission. Reviews ethics statement

How smart can you make your bathroom?

For better or worse, your entire bathroom is coming online. Here are the products that will make that happen.

Step into a smarter bathroom with these connected gadgets

If you're ready to bring connectivity into the most private room of your house, smart showers, toilets, mirrors and even toothbrushes are out there with the goal of making your morning routine easier. Click through to see the gadgets you can use if you want to bring tech into your bathroom business.

A smart toothbrush might seem unnecessarily complicated, but perhaps your kids would want to brush their teeth if they could slay monsters while they do it. At least that's the theory behind the upcoming $30 toothbrush from Kolibree. It will let them do just that with an accompanying augmented reality gaming app.

If you want to make a bigger splash into the smart bathroom, you could start with a smart shower. The Hydrao First is a $100 Bluetooth showerhead that changes colors as you use it. Once it glows red, you've reached your predetermined volume threshold, and it's time to get out.

Most smart showers require a full remodel, and Elmer's is no exception. That said, this French startup will use your new enclosure to the fullest. In addition to app controlled smarts, the $1,500 shower will play your music in surround sound. You can also control your shower with Amazon's assistant, Alexa.

U by Moen Smart Shower

We installed the U by Moen Shower in the CNET Smart Home. One of the first smart showers to hit the market, you can control the shower with an app, set temperature preferences for different users, and even set a time limit that'll display on the screen.

The pictured shower is the four-outlet version, which costs $2,200 and requires a remodel. Moen's making its shower even smarter soon by adding compatibility with Amazon's Alexa and Apple's digital assistant Siri.

Kohler is actually rolling out a whole suite of connected bathroom products, including their own app controlled smart shower.

Yep, Kohler's toilet is also getting a connectivity upgrade. You'll be able to flush this model with a voice command. 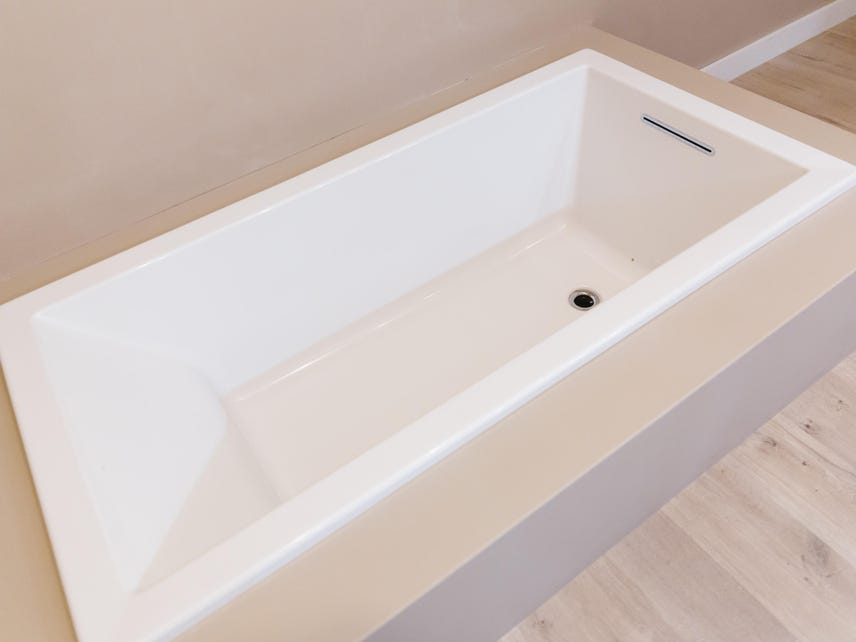 Still a concept at this point, Kohler's PerfectFill Bathtub will let you set the fill level and temperature of your bath with a voice command.

Kohler's smart bathroom actually centers on the mirror. The Verdara Mirror has an Alexa speaker built-in, so you can issue voice commands directly to it without needing a separate smart speaker or phone. It'll also act as a bridge to any other Kohler smart products you have in your bathroom. Tell your mirror when you're ready for a bath, and it can fill it your PerfectFill tub.

You don't need a full remodel for all smart bathroom products. Tech startup Livin is rolling out a retrofit smart shower that offers the same connected perks as Moen and Kohler's replacement models. It's still not cheap at $700, but it should be simple to install as you just need to replace your faucet and showerhead for full app-enabled smarts.

We'd seen smart mirrors before Kohler's Verdara model. The $400 Simplehuman Sensor Mirror uses its built-in LEDs to mimic various lighting conditions, so you can get a better idea of what your makeup will look like when you're out and about.

The $400 Viio Vezzo keeps its smarts simple -- it'll connect to your phone with Bluetooth and play audio on its own built-in speakers.

If you want your smart bathroom with a side of judgment, the upcoming HiMirror Mini will analyze your skin and give you makeup advice based on your own wrinkles, dark spots, pores and the like.

You can also upgrade your scale with smarts for cloud connected help with losing weight. The Fitbit Aria syncs with the Fitbit app and tracks weight, body fat percentage and more.

Under Armour's smart scale is only available as part of a $400 HealthBox bundle. The scale also measures weight and body fat percentage and calculates your body mass index (BMI). It tracks these stats in an app.

Beyond the rest, Garmin's Index Smart Scale measures muscle mass, body water percentage and bone mass in addition to the basics like weight and BMI.

One of the most affordable smart bathroom gadgets of any sort, the $40 Pivotal Living scale syncs with an app and measures your daily resting calorie burn -- called your basal metabolic rate -- in addition to the basics like weight and body fat.

The 42 Best Games on Nintendo Switch

20 Photos
Movies Coming in 2022 From Marvel, Netflix, DC and More